Thousands of health professionals have been suspended as the Queensland vaccine campaign continues.

Thousands of unvaccinated Queensland Health employees have been placed on leave as the vaccination deadline approaches. 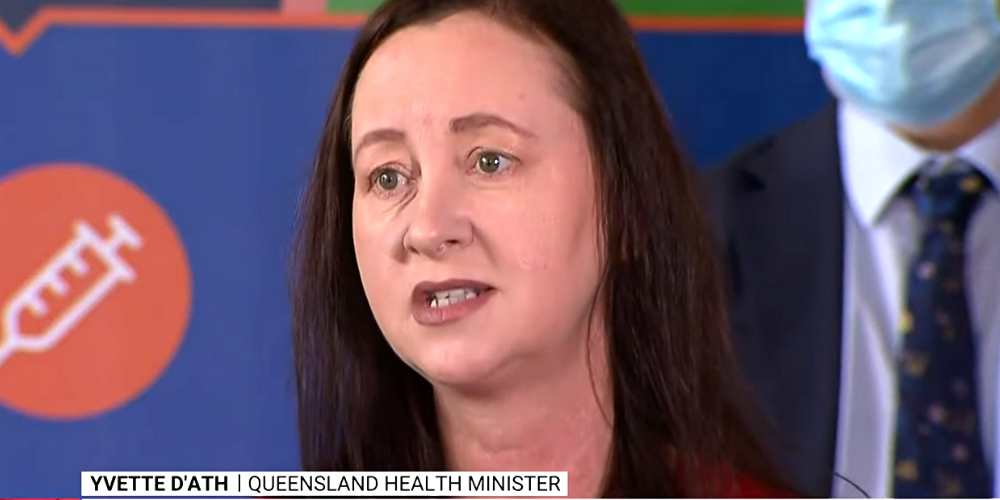 On Monday, Queensland reported no new coronavirus infections in the community and only one case in a hotel quarantine, which was a person who had traveled to Australia from Ukraine.

Thousands of unvaccinated Queensland Health employees have been placed on leave as the vaccination deadline approaches.

On Monday, Queensland reported no new coronavirus infections in the community and only one case in a hotel quarantine, which was a person who had traveled to Australia from Ukraine.
The state held yet another massive vaccination drive over the weekend, with 14,171 doses administered over three days, with 3399 of them administered at theme parks and surf clubs alone.

As of Monday morning, 77.6% of Queenslanders had received one dose and 63.87 percent had received all three doses.

However, Queensland Health Minister Yvette D’Ath claimed that roughly 4000 employees missed the vaccination deadline on November 1 and would be given show cause warnings.

Ms D’Ath said the government made no apologies for requiring that all Queensland Health personnel be fully vaccinated, as they were on the frontlines of any viral response, particularly as the state opened its borders.

“There will be some disruptions,” she said, “but we’ve been planning for this, and the TGA has stated that there would be unanticipated disruptions [as a result of this policy].”

“Those disruptions would be substantially fewer if we had unvaccinated workers caring for patients who could contract the illness.”

According to the minister, the number of unvaccinated employees was minor in comparison to the state’s 100,000-strong health workforce and was scattered throughout different health districts.

Ms D’Ath predicted that many of the skeptics would eventually be vaccinated, citing the example of the aged-care industry, which has a 96.3 percent double-dose rate among public-sector employees.

Deputy Police Commissioner Steve Gollschewski reminded people that Queensland’s border policy had not altered as of Monday, as the state prepared to accelerate its vaccination rate ahead of anticipated benchmark dates of November 19 for 70% double-dosed and December 17 for 80%.

On Sunday, 8000 vehicles were examined at Queensland’s road borders, and “many people” were attempting to cross without necessary authorization, according to Mr Gollschewski, who said six on-the-spot fines were imposed.

“Please, for those coming into our state, understand and abide by the requirements,” he stated.

Ms D’Ath stated that the government and police would work out the operational procedures for determining whether someone had met the criteria for entering Queensland at the 70% and 80% benchmarks.

Ms D’Ath urged Queensland residents to get vaccinated as quickly as possible, noting that there was still time but that the borders would reopen soon.

“The message is simple: get vaccinated now,” she added. “The borders are opening, and the virus will get in.”

Duran Raman, an alleged border jumper who caused a COVID fear on the Gold Coast last month, was fined $4135 for a border breach, according to police.

On Monday, Jeannette Young, Queensland’s long-serving Chief Health Officer, will be sworn in as the state’s new Governor.

For the first time, Queensland’s Premier, Governor, and Chief Justice have all been held simultaneously by women, according to Deputy Premier Steven Miles.