If you felt January was hotter than usual, the data back you up, with the month shattering decades-old temperature records.

Melburnians have experienced a string of excruciatingly hot nights, with a mean low temperature of 18.3 degrees in January, the hottest average minimum temperature for any month since records began in 1855. Last month’s temperature was nearly 4 degrees higher than the previous high.

The city also tied a 1974 record for the most days in a month over 30 degrees, according to the Bureau of Meteorology, with 17. For the first time since March 2013, Melbourne had a seven-day stretch of temperatures exceeding 30 degrees.

Melbourne’s warmest day of the month, as measured at Olympic Park, was January 1, when the temperature reached 37.1 degrees and dropped to 20.5 degrees. The hottest low temperature was recorded on January 28 at 21.7 degrees.

Due to a lot of cloud cover and humid air streaming over the state, Bureau duty forecaster Jonathan How said temperatures were above normal for both minimums and maximums across Victoria.

Climate warming, according to Andrew King, a climate science lecturer at the University of Melbourne, is increasing the frequency and intensity of hot extremes. 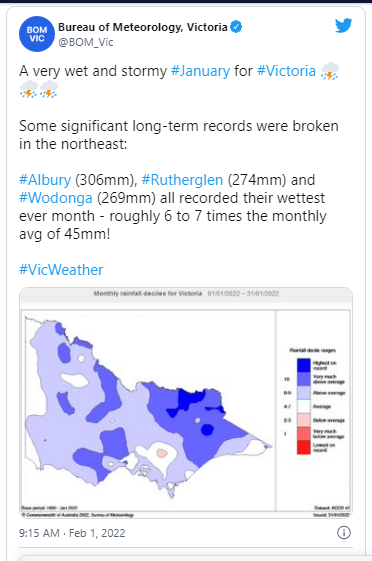 “Obviously, this past month we saw a new joint daily record for Australia, with the 50.7 degrees in northern [Western Australia].”

“As the climate continues to warm, we’re going to see more heat records, we will see more days over 35 [degrees] and more days over 40 as well – that will happen – and also the possibility of days over 45 or even 50 in Melbourne.” he says.

“If we keep emitting greenhouse gases and keep warming the planet, it’s possible that in a few decades’ time … mid-21st century there’s a reasonable chance we’d be having 50-degree days in Melbourne and Sydney.”

Melbourne’s humidity was also at all-time highs in January, with “dew point” readings – which indicate how much moisture is in the air – breaking prior monthly records by a wide margin.

“We measure [humidity] by looking at the dew point temperatures at 9am and 3pm, and they’re well above average due to La Nina, with a lot of moisture coming down from the north,” said Mr How of the bureau.

Victoria’s January was the seventh wettest on record, and the wettest since 2011 – the previous time the La Nina weather pattern occurred– with statewide rainfall 90 percent over average.

In January, the state’s north-east received some of the heaviest rainfall on record. Rutherglen and Wodonga both had their wettest ever months, with 274 and 269 millimetres of rain, respectively, which was almost six to seven times the monthly normal of 45 millimetres, according to the bureau.

With 306 mm of rain in a single month, Albury set a new record for rainfall.

In January, Melbourne had 79.6 mm of rain, which is roughly 33 millimetres more than the normal.

“It’s been the reverse scenario, with very dry weather all over the South Australian border,” Mr How said in the state’s far west.

“[This summer’s La Nina] helps to explain why it has been wetter than usual, particularly across the east.

“[The weather has been] warm, humid, wet and kind of in line with what we were expecting this summer with La Nina.”

Australia is experiencing a La Nina weather phenomenon, which means colder (but not necessarily freezing) temperatures, more wet days, and a higher danger of storms. El Nino, on the other hand, delivers higher temperatures and less precipitation. Both come from the Pacific Ocean.

Dr. King said that while climate change was likely affecting weather systems such as La Nina and El Nino, the effects were “minor” compared to the effects on heatwaves and heat extremes.

A humid and unstable air mass is expected to generate “heavy” rainfall and destructive gusts, according to the bureau, which issued a severe thunderstorm warning for portions of north-east Victoria on Tuesday.

VicEmergency has issued a “watch and act” advisory, advising residents in places such as Bright, Mount Hotham, and Falls Creek to prepare for possible life-threatening flash floods by taking shelter.

Jason Herd is a Melbourne local born and raised. Jason has been writing on a range of topics for Melbourneaus and various other blogs since 2010. Jason is one of Melbourne's hardest-working bloggers and dishes up some of our vibrant cities' most useful informational articles.